Singular Apps use HTML, CSS and JavaScript code. Apps can be simple, e.g. just setting a single line of text, triggering animation or more complex, as e.g. the Singular Studio Control App you allready may know.

If you want to develop Singular Control Widgets, please check out the Singular Widget SDK documentation.

This documentation is open source. If you’ve found any errors, typos or would like to improve this document, feel free to send us requests and comments to sdk@singular.live.

The Singular App SDK requires a local installation of node.js. You can find the latest documentation on node.js and download it from https://nodejs.org/en/.

After the installation of node.js, open the console and install the latest Singular-cli.

After the installing the cli, console commands to create and deploy Singular Widgets and Apps will become available.

The create commands serve to clone the Singular boiler plates into the specified folder.

The deploy commands check, package and upload the widget or App code to Singular.live. Every widget and App is identified by a unique deploy key. How to generate a deploy key, is covered in the section Creating a Singular Widget.

More information about the Singlar.live cli’s:

Source code of the widget and App boiler plates:

The following steps are required to create a Singular Widget:

Creating an App on your local disk¶

The following commands will create a folder on your local disk and download the App source code. We recommend adding this folder to your source code management tool.

This set of commands creates the folder “myFirstApp” and clones the widget boiler plate into this folder.

Creating a App in Singular.live¶

To create a App for Singular.live, login with an account that has developer permissions. To check your user permissions, open the “User Administration” of your Singular account.

Select the App Manager in the Account Drop Down Menu.

Create a new App by clicking the New App button. Enter a name and a category for your App. The App name does not need to match the name of the folder used with the singular createapp command. Nevertheless, we recommend using the same names.

Enable your App for a composition and an output channel¶

The Add composition button allows to add one or more compositions to your created App.

By using the Add Output button, you can select the output(s) for your App.

Open the App Manager and select your app. Copy the Deploy Key from the App Details into the deploykey.json file. The file should look like this:

Upload the App code to Singular using following command in the node.js console:

The deploy script will then read the deploy.json file, exract the deploy key, create a zip-file of the app sources and upload it to the Singular.live cloud. Your app then will be visible in the App Browser when creating a new app instance.

Activate the Show Dev Versions checkbox in the App Browser to access the development version of your app.

Testing and debugging an App¶

When the App is fully tested, use the Publish function to make it available for other users.

Apps never get deleted from the Singular.live platform. They are always in one of the following states:

getControlNode, getPayload and getModel return copies of the objects, not the references. Making changes to the object returned from calling them will not change any information in compositions.

In our example, we see one version of the App in state Development. The development version is always on top of the version list and this is where you upload your source code to.

Once you are happy with your App you can publish the development version by clicking the Publish button you see in App version list.

In our example, we will see two versions after we publish our development version: one is development and one is published.

The Singular App deploy command will now upload the source code into version 2. This is the development version, whereas the published version cannot be changed.

When you publish the development again you will see three versions. One is the new development version, one is the published version and there will also be an archived version.

If you want to upgrade Apps in a composition you can do that in the App info editor in the lower left corner of the composition editor.

A Virtual App Instance is required for developing and testing a Singular App without deploying it to the Singular Cloud. 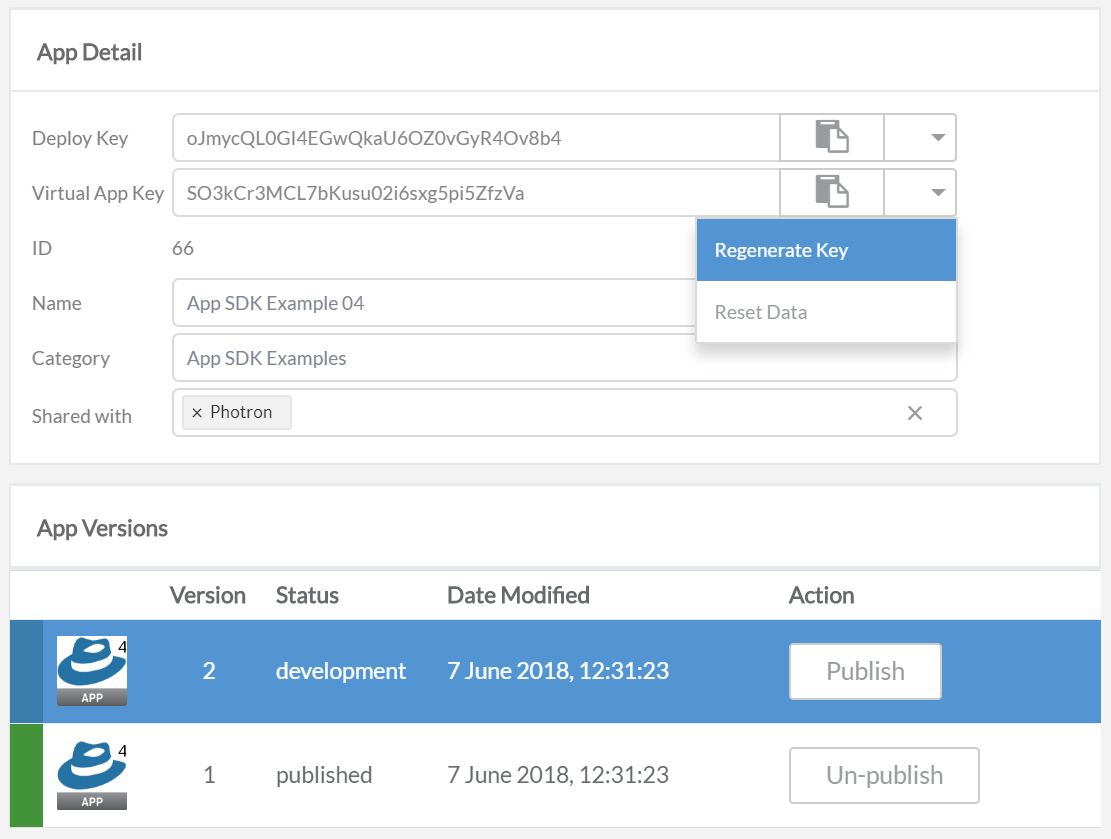 Initialize the Virtual App Instance in your JavaScript code¶

Add JavaScript Libraries to your code:

Call SingularApp.createWithAppInstanceKey passing the Virtual App Key from the App Manager, base URL, callback function, username and password from your Singular Account.

Run your app on your own server. When the app is running outside the Singular Cloud, singularAppInit will also return the Singular App object via the callback function.

Using Singular Forms in an App¶

Use singularApp.createSingularForm to insert a Singular Form in the HTML DOM. singularApp creates the iFrame and inserts it into the DOM tree.

To create the form with default values, set ctrlNode.payload = null before passing it to createSingularForm.

A Singular Form supports the built-in image browser. A click on the image browser returns the event imagebrowser_clicked with image key: msg.payloadKey